Congratulations to the U13 and U15 Netball teams. Roedean enter the annual ‘Sisters n Sport’ National Netball Cup and Plate competition. This year we knew the girls would perform well as they had trained hard throughout lockdown, in their gardens, and back at school despite no fixtures the previous academic year. The U13’s and U15’s commenced their journey to the final in September where they had their first round. They battled hard in every round and produced some fantastic results.

Ahead of the National Plate Finals in Bromsgrove on Tuesday 22nd March, the girls were in good spirits, and it was good to see them bonding and enjoying the trip they so thoroughly deserved.

The U13s were up first against a strong King's School. Roedean didn't let the nerves show and took the lead straight away. There was excellent movement and accurate shooting from Gabriella and Harriet, which meant that Roedean were 5-2 up after the first quarter. In the second quarter, King's made us play a more tactical and patient game of netball. Molly stepped up, led by example, and took control of the mid-court effectively. The girls managed to push their lead to 4 at half time. In the second half, our defence worked tirelessly, making intercept after intercept, giving us more opportunities to build on Roedean’s lead. Elsa put excellent pressure on the ball carrier, allowing Gabby and Ruby to take amazing intercepts. Tessa linked nicely with defence and worked the ball to circle edge, feeding the shooters fantastically. At the end of the third quarter, Roedean were leading by 6. King’s came out firing in the final quarter and fought extremely hard for every ball. With only 5 minutes to go, they had clawed it back and were only behind Roedean by 1! However, Roedean steadied their play and looked after the ball well. When we needed the intercepts, Ruby and Molly came to the rescue. Roedean took it to goal and then scored their centre pass, taking the win 23-20. The whole team was outstanding, they all played some phenomenal Netball, and we couldn't be prouder of the squad. Congratulations to Molly and Ruby who were named Coaches’ Players. Even more remarkable is that Ruby was named the ‘Sisters n Sport’ Player of the match for her intercepts and support down court. After a tense and nail-biting match, we then had a couple of hours off before the U15s took to court. 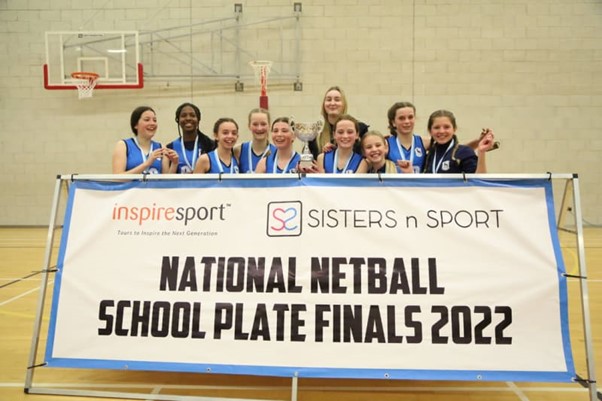 The U15s were, understandably, under some pressure after watching the U13s win their game only a few hours earlier. After completing their warmup well their nerves were still high, the Year 10s stepped onto the court to play Headington, from Oxford. The girls knew their friends were watching the live-streamed the game from the Roedean Cliffs and they did not disappoint the crowd. The team took an early 7-2 lead after the first quarter, making turnover after turnover from the first whistle. Another big push came in the second quarter, giving the girls a 10-goal lead. Even with a strong lead, the team didn’t take their foot off the gas, pushing even further on with 32-10 on the score board heading into the final 13 minutes of the game. With steady heads and the National Plate trophy right within reach, the team firmly stamped their name on their medals with a convincing 45-15 win overall, taking the National Plate Title. It was captain, Pearl, who was named Coaches’ Player for her constantly high performance throughout the whole ‘Sisters n Sport’ competition and her impressive leadership of the team. Shooter, Elsie, was selected as the ‘Sisters n Sport’ girl of the game for her calm composure in the shooting circle and her unbelievable long shots. Well done to all 9 players who stepped on court – it was an outstandingly impressive achievement!

It was a big day for Roedean Netball after a hugely successful season. We are so proud of both squads – getting to the National Plate Finals is an achievement in itself, let alone taking both wins. All the girls showed class and quality throughout and were thoroughly deserving of their wins. This year the girls have played 210 fixtures, with 27 teams competing weekly. They have increased their win percentage by 20% from the last season pre-COVID. The U15’s and U16’s also won the Sussex Knock-Out Cup, with the U12’s coming a narrow second. We cannot wait to see what next season brings!

The two team captains both thoroughly enjoyed the experience:

Molly, U13 Captain: "It was a really fun experience, and it was nice to spend time with the team beforehand. The atmosphere there while playing was amazing, and I think it really helped us push for the win and helped the team persevere. The feeling at the end of the match when we realised we won was pure joy and this will be a memory I will never forget."

Pearl, U15 Captain: "A fantastic experience for the whole team! It was great for team bonding and really showed the hard work and dedication we put into training"

There are still spaces on the OR Netball team if you would like to take on our girls at our ORs vs Student match on Saturday 7th May, to find out more and to sign up, please click here. Congratulations to the U13 and U15 Netball teams. More... We are delighted to announce the birth of five lambs on the Roedean Farm. More...