Black History Month is an important time for the School to showcase the work that we have been doing year-round to celebrate and amplify the achievements and contributions of those with African and Caribbean roots across a wide range of areas from major historical and political events, to the performing arts. The theme this year is Proud to Be and we curated a range of events, speakers and displays that showcase the contributions of people from a diverse range of Black backgrounds. As a community, we are particularly grateful to the pupils, past and present, who have given their time, thoughts and intellect so generously to share stories and histories with us. We are proud to be Roedean.

A couple of highlights over the month. 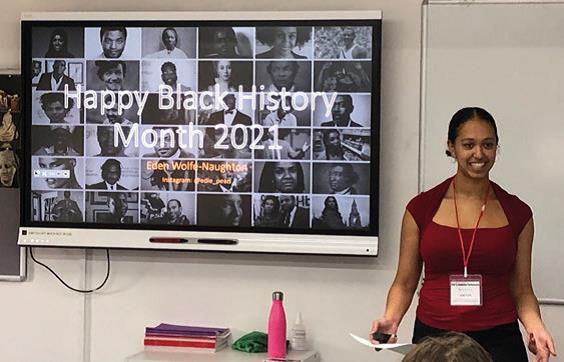 'I was so happy to have the chance to hear Eden (No. 4, 2014-21) speak about her EPQ research, and to have the opportunity to take a critical look at the treatment of black Germans both before and during the Nazi regime. Although I'd spent a long time studying Weimar Germany for GCSE History, I had been largely unaware of the way that racism functioned in parallel to anti-semitism at the same time, and particularly of the significance of the German colonies and the way they fuelled anti-Black, government-driven propaganda in the country. It was a really great way to engage with Black History Month, and I really learnt a lot!' Alma (Year 12)

Dr Hobbs and Ms Boobis worked with some Sixth Formers to share their thoughts about Black History Month in Chapel. The theme of this year’s Black History Month is ‘Proud To Be’. It is an opportunity for us to celebrate and recognise the contributions that black and brown people from African and Caribbean roots have made, and continue to make, to British history. Sometimes this is directly, and sometimes through being influential on a global stage.

‘There is a strong idea in the media that black people must be ‘successful’ to stand out. This is not fair as black people should not have to prove themselves to belong somewhere. In the media, black women are shown to be: they are sassy, angry, political, broke, do not get along with each other. Such presentations are destructive and unrepresentative of what black women are like. Actors like Taraji P. Henson and Viola Davis have made it very clear that black women defy categorisation through their pushing for more diverse representation of lifestyles and roles available for black women.

Michaela Coel is Ghanaian British. Her historic Emmy win for writing ‘I May Destroy You’ came just months after the same series failed to receive a single Golden Globe nomination. After an investigation, it was revealed that the voting organisation had no black voters. Michaela Coel turned down a 1 million dollar deal with Netflix so that she could retain the copyright to her own work, which she had redrafted 200 times. She now has total creative control of the series, which has earned her critical acclaim, hundreds of thousands of dollars, and several BAFTAs, as well as her Emmy.

I am Fadillah, and I am proud to be Black British, a Muslim, and on my way to working in finance, an area under represented by women, especially black women.’ Our recent student-led Chapel service focused on 3 ORs who since leaving Roedean, have been 'Climate Heroes': Nathalie W… More... Sleeping Rough with Off The Fence

Mr Weir, a Mathematics teacher at Roedean, experiences what a night is actually like for the homeless. More... Take a trip down memory lane, and take part in our Roedean Quiz! More... A global collaboration celebrating the return to live theatre. More... For World Mental Health Day we chatted with child and adolescent psychiatrist Sophia Williams (Borthwick, No. 4, 1985-88) whose career was inspired by… More...