Janet (Milne, No.1, 1964 – 67) grew up in the Middle East and has published many books and articles on the region. After assignments in the Middle East (including Jordan, Oman, Qatar, and Kuwait), she worked at the British Museum and then the Oriental Museum, Durham. She became Peripatetic Ethnographer for North-East England and then lectured at Durham University in Scoio-Cultural Anthropology, Material Culture, Artefact Studies and Middle Eastern Studies for many years. Janet has written and contributed to numerous publications. 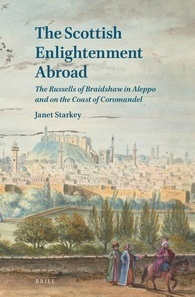 With family roots in Aberdeenshire and Banffshire that can be traced at least back to the 1690s, she returns to explore her family heritage through her latest book, The Scottish Enlightenment Abroad: the Russells of Braidshaw in Aleppo and on the Coast of Coromandel (Leiden: Brill, 2018). In this book Janet examines the lives and works of Scots working in the mid eighteenth century with the Levant Company in Aleppo, then within the Ottoman Empire; and those working with the East India Company in India, especially in the fields of natural history, medicine, ethnography and the collection of Arabic and Persian manuscripts. The focus is on brothers from Edinburgh: Alexander Russell MD FRS, Patrick Russell MD FRS, Claud Russell and William Russell FRS. By examining a wide range of modern interpretations, she argues that the Scottish Enlightenment was not just a philosophical discourse but a multi-faceted cultural revolution that owed its vibrancy to ties of kinship, and to strong commercial and intellectual links with Europe and further abroad.
For more information on Janet’s work and publications, please see http://www.pandjstarkey.com/index.asp As part of the School marking the 100th anniversary of the end of the First World War, Sixth Form students looked into the School's archives to see the role Old Rodeanians played i… More... It was a delight and an honour to welcome Dame Carol Black, Newnham College's current Principal, to the School as our Gu… More...